This project was awarded a Silver Badge in the SALI Awards of Excellence in 2020. Here’s why. 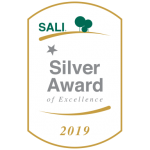 These trees had to be tough.

They had to be drought-tolerant.

And they had to be beautiful.

We delivered on all these aspects and more.

Background: South Africa won the bid to host the FIFA Soccer World Cup for 2010. Cape Town was one of the host cities and the City of Cape Town needed to look at the current infrastructure that needed to be upgraded for the purpose of hosting a successful FIFA World Cup in 2010.

The historical Grand Parade was identified as one of the areas that needed a revamp because it would serve as a “Fan Park” for the World Cup. Paving, lighting and soft landscaping needed to be upgraded. In terms of the soft landscaping, the city required an assessment regarding the current landscaping on the site and advice on whether these trees will be sustainable and if not, comments on suitable replacement species. Factors such as historical significance, sustainability, drought-tolerance, and hardiness of plant species needed to be taken into consideration. 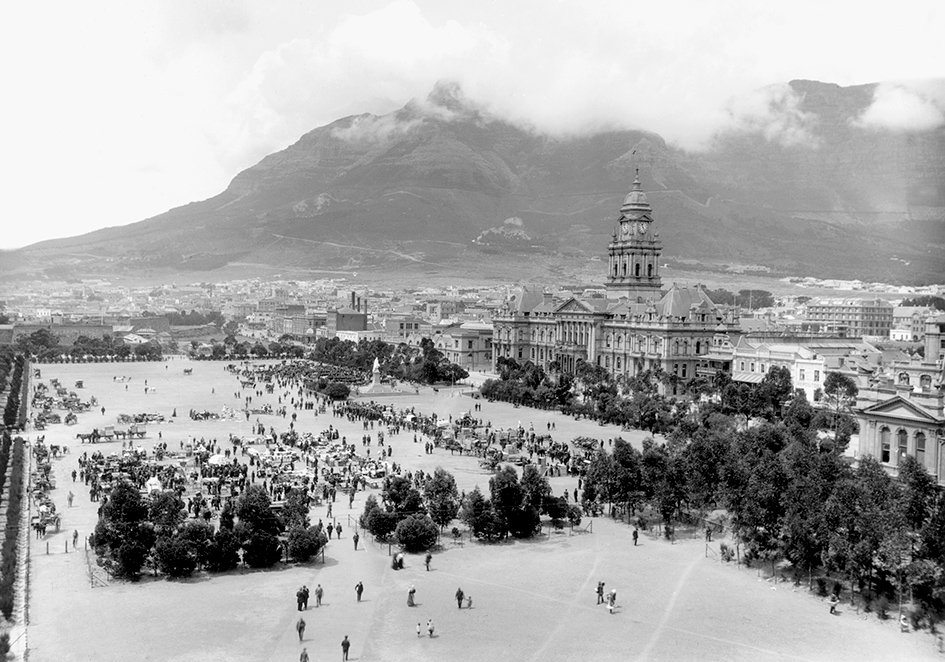 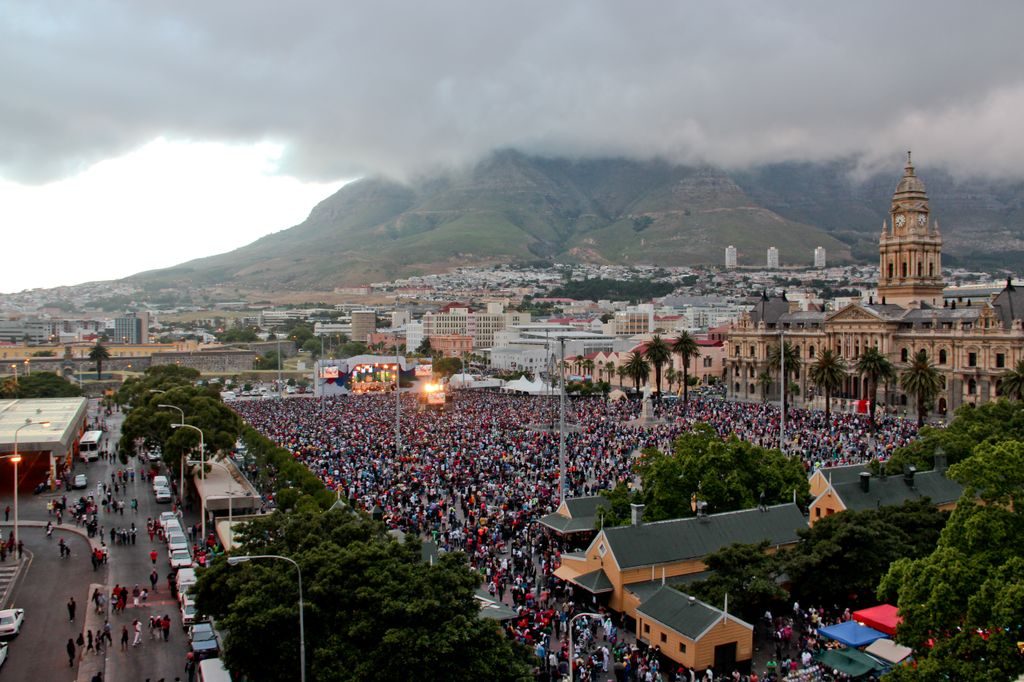 The main contractor, Kaulani Civils South, appointed Urban Scapes as the landscape architects. Their proposed landscaping design would consist of a double row of stone pines to surround the perimeter of the grand parade.

In order to determine the suitability, viability and availability of the species Pinus pinea, Dag Willems of Trees SA, a consulting arborist was approached to advise on the species selection. Being an exotic pine species, there was some resistance by officials of the city parks department. A joint meeting where with amongst other representatives of the city parks, Iliso Consulting engineers, Urban Scapes, Historical and Cultural committee for the city and Dag Willems were present, was convened. The landscape design plan was presented and motivated by Urban Scapes. One of the motivating reasons was that stone pines used to be planted at the grand parade previously. Dag’s opinion was asked, and he supported the design and species selection from the following points of view:

The design and choice of species was approved by the authorities. Part of the design was that a large number (25) mature Ficus rubiginosa (including one enormous tree with a diameter of 800mm) as well as 2 very large Phoenix canariensis (largest weighed 20 ton) trees had to be relocated to two different sites in Paarden Eiland.

2009 – Rescue and Relocation of existing trees 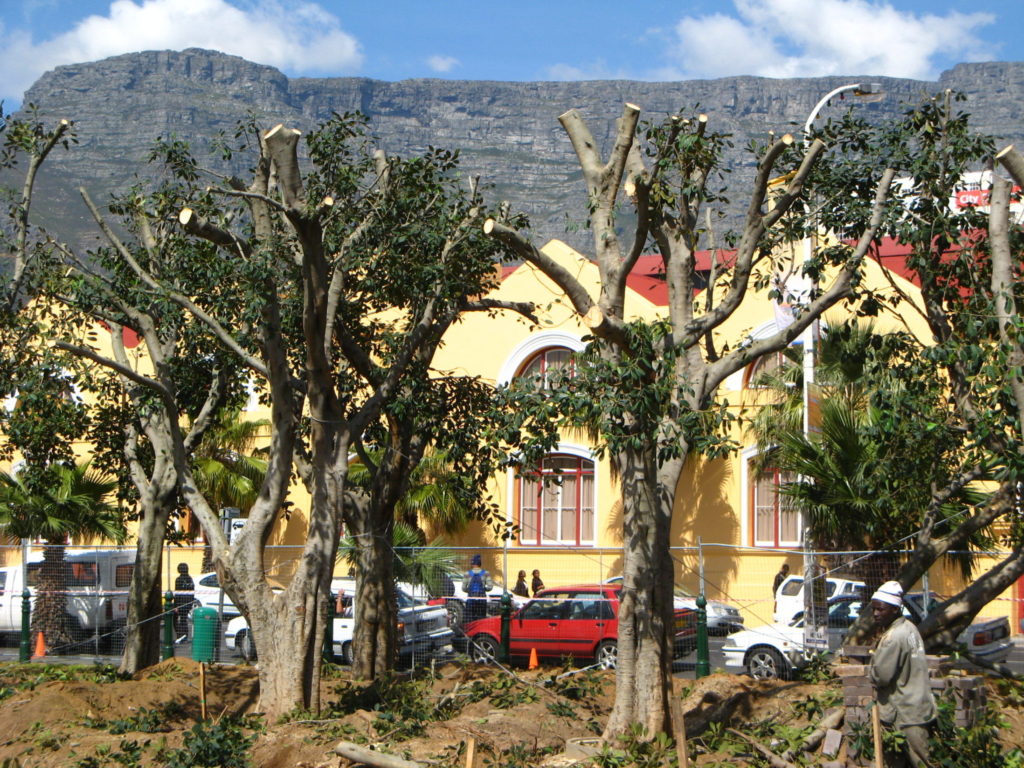 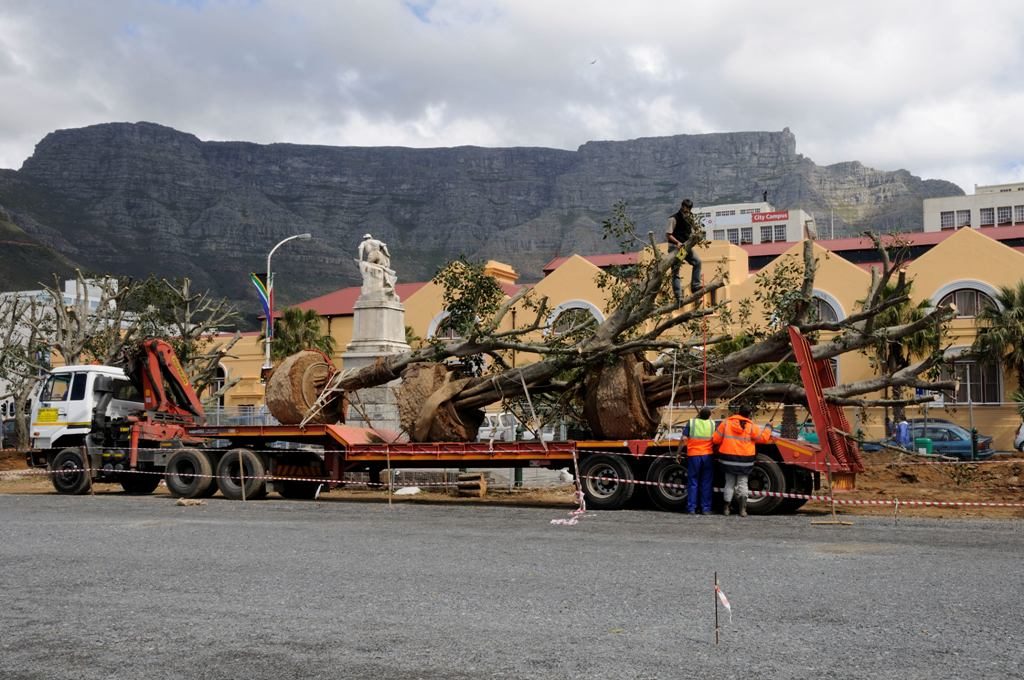 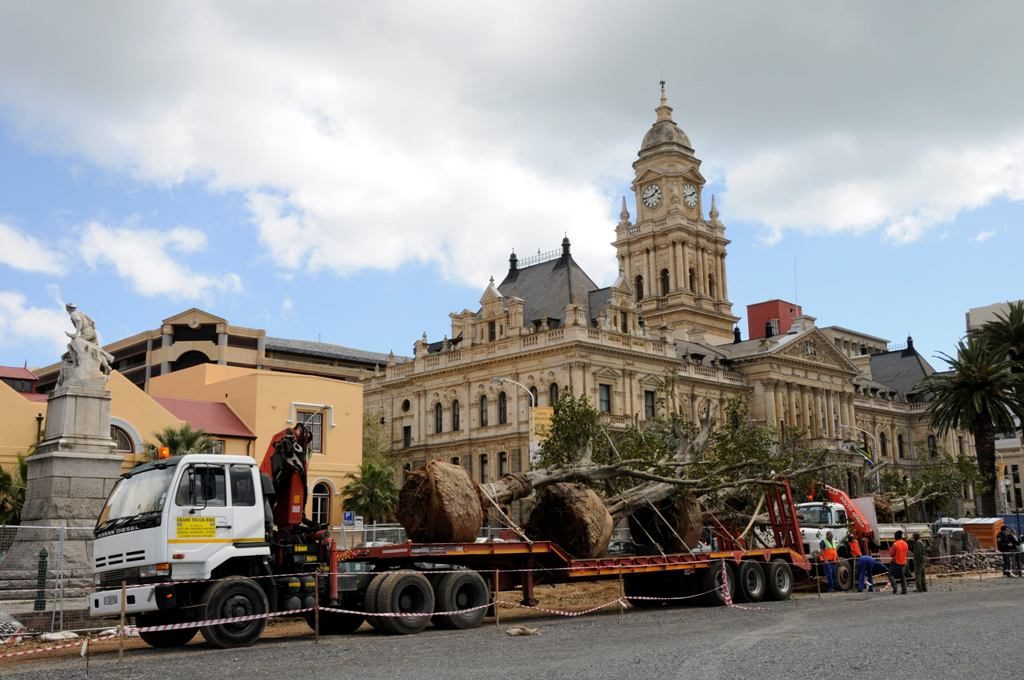 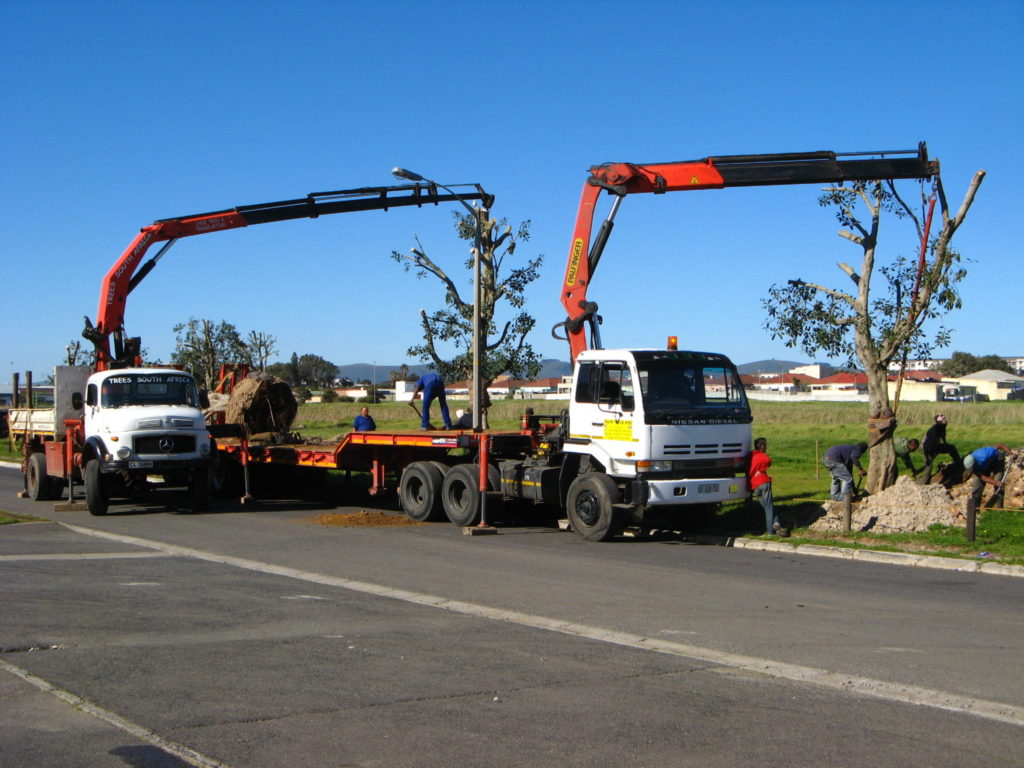 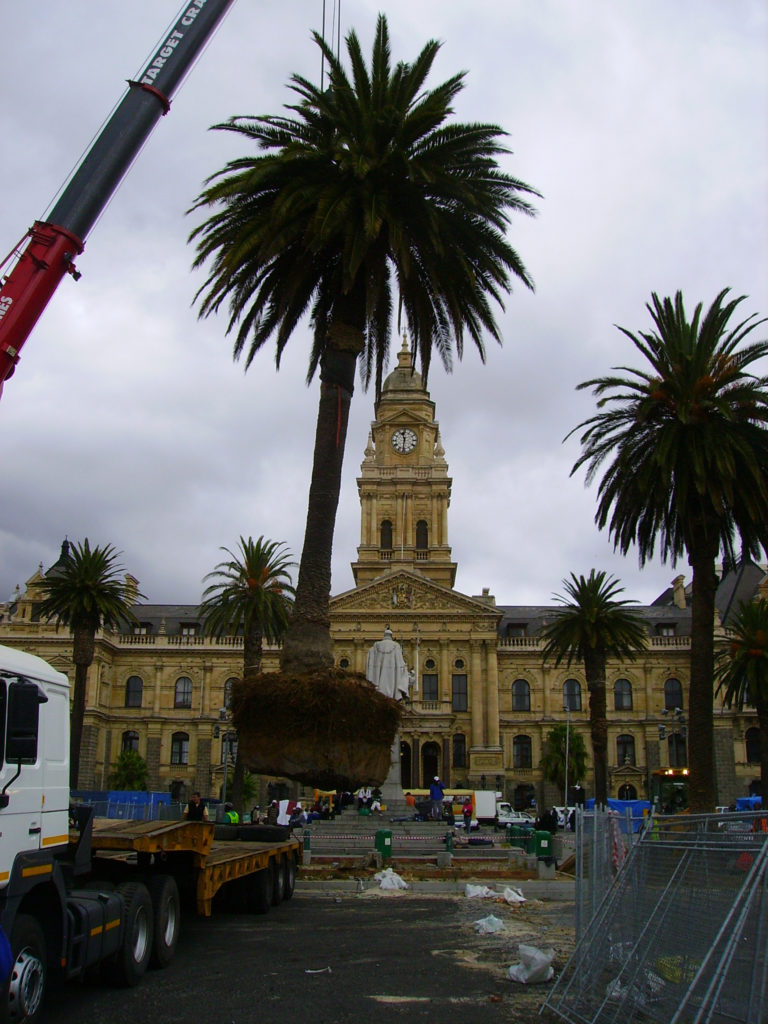 As with any large project in a public space, we had our fair share of challenging obstacles to overcome. Firstly, this was for the World Cup and therefore we were working under a tight deadline to complete the project and have the area ready to accommodate thousands of tourists and fans. Secondly, we had to make sure that we had enough Stone Pines ready in time for transplant, which meant sourcing the correct species and growing them to be healthy and strong enough at the time of transplant. Lastly, because this area is also used for informal trading, we experienced a lot of vandalism to our pedestrian staking, irrigation pipes and to the tree trunks in this very public space. Regardless of these challenges, we have overcome them all and the trees are now growing strong 10 years later. 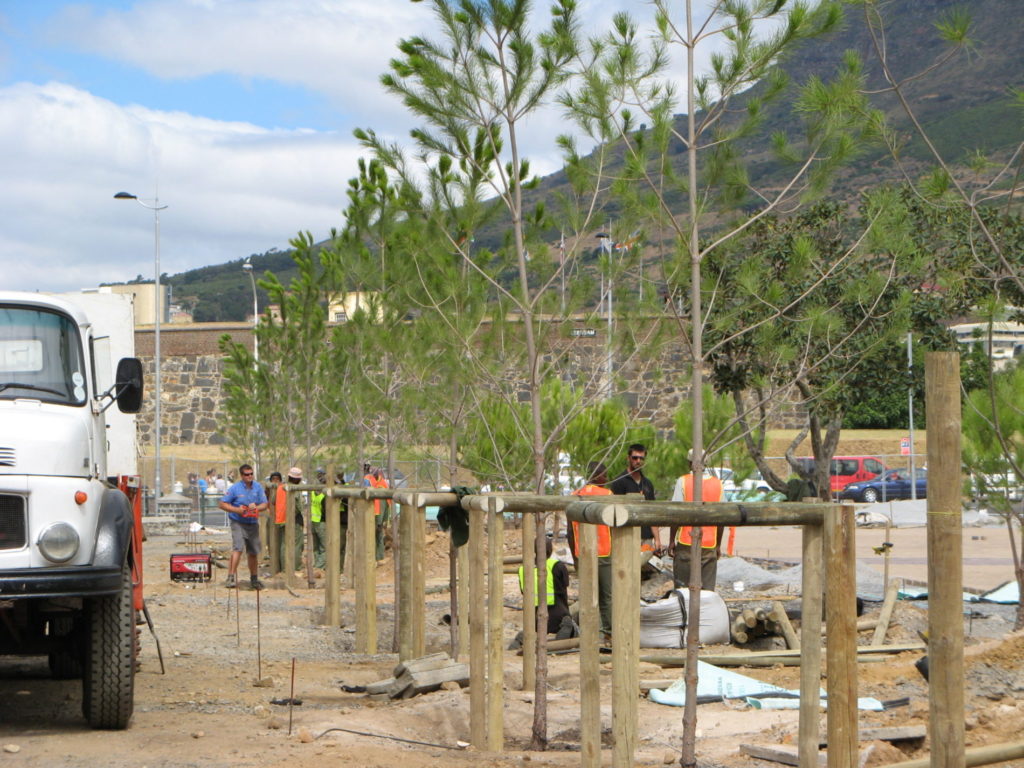 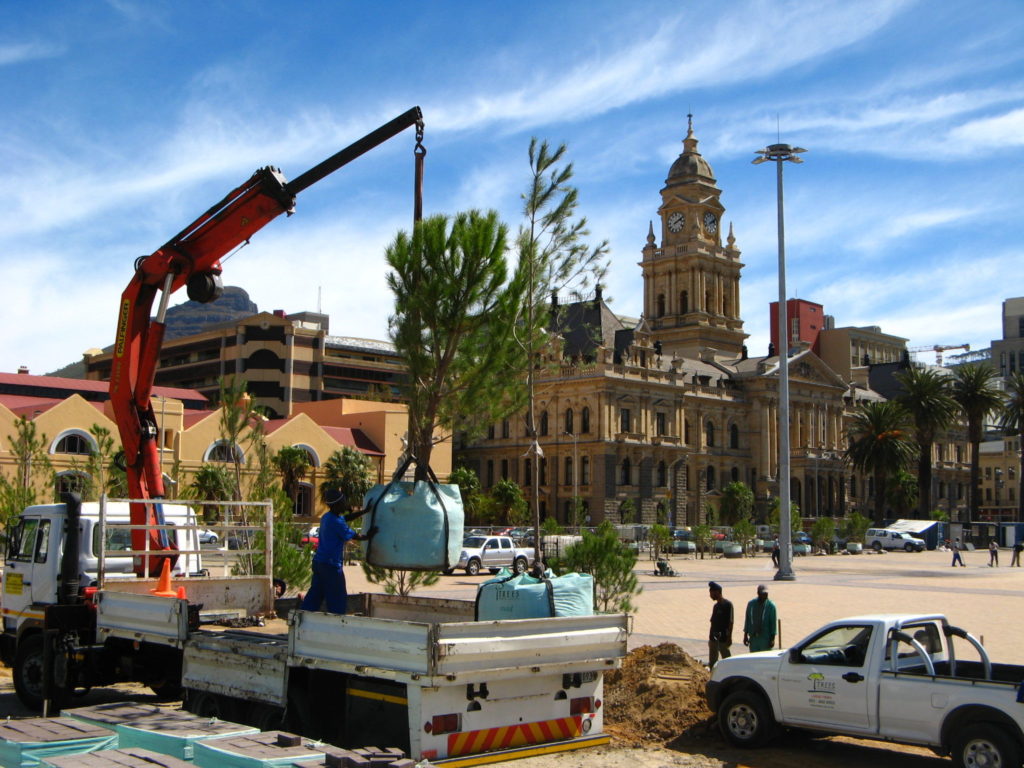 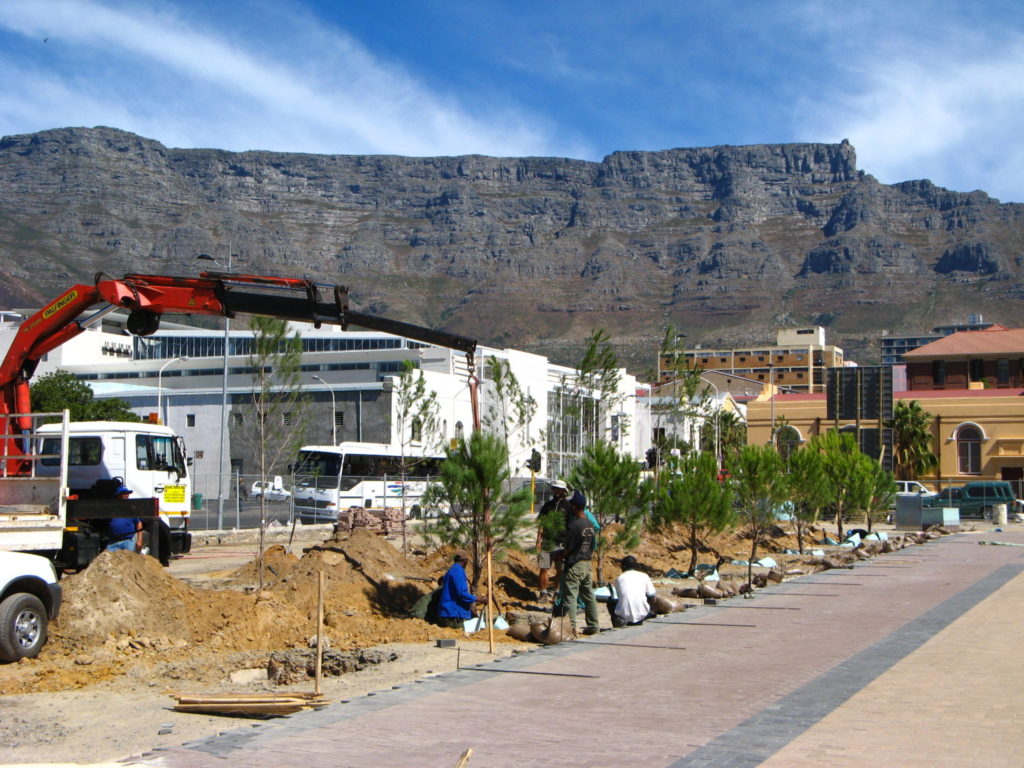 We are strong believers in preserving our environment and therefore try to use water as sparingly as possible. These are a few points on the water conservation methods employed during this project:

• Choice of plant material: The selection of the tree species in itself is a water conservation method. Newly planted mature trees of this size (1000-litre) do require consistent watering during first 2 years of establishment whereafter the trees become COMPLETELY INDEPENDENT from artificial watering. In the case of the Pinus pinea species, this is regarded as a drought-resistant tree species. It has been CLEARLY tested during the 2016-2018 drought experienced by Cape Town.
• Irrigation design elements: During the first two years, the trees are given water through the drip irrigation method. Drip irrigation is also a form of water conservation as there is NO WASTE (no evaporation, no run-off) and the entire rootball gets saturated. Various studies on drip irrigation on crop yields etc have already been conducted to prove its efficiency. We used Netafim irrigation products. Read more on their website: https://www.netafim.co.za/drip-irrigation/#top
• Moisture probes: We use our own patented design tool called “Soil Track” which is used to measure the moisture at various levels within the rootball of the trees. During our maintenance period, we measured the soil moisture once a month of all the trees.
• Monitoring of water use on site: as per our maintenance agreement and mentioned in this document already, we were responsible for reporting on the water use on the site. As mentioned, the irrigation subcontractor did not follow our recommendations of the watering required for the rescued and relocated Ficus trees which resulted in losses.

We were responsible for the maintenance of the 130 x Stone Pines and the 25 x Ficus and the 2 x Palms for a period of 12 months post installation. 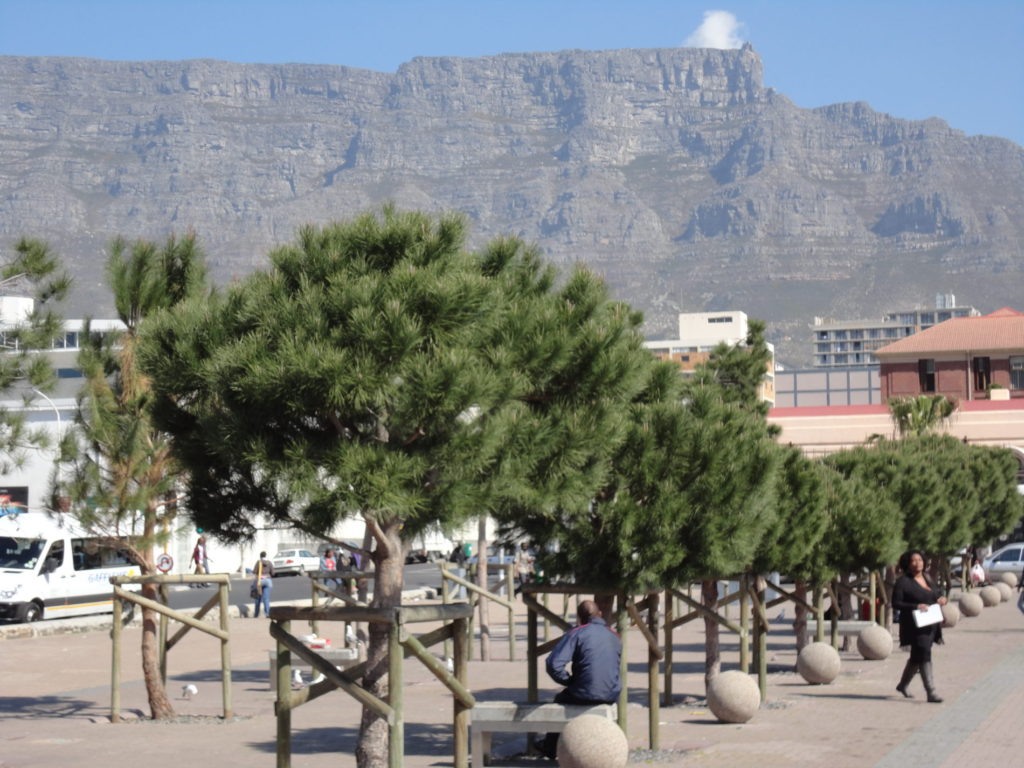 The fact that the Stone Pines are still flourishing after 10 years is testament to the success of the project from the initial stages of deciding on these species, to the implementation of the project, installation of the trees and the valuable custom pedestrian staking that was crucial in the first year of establishment. 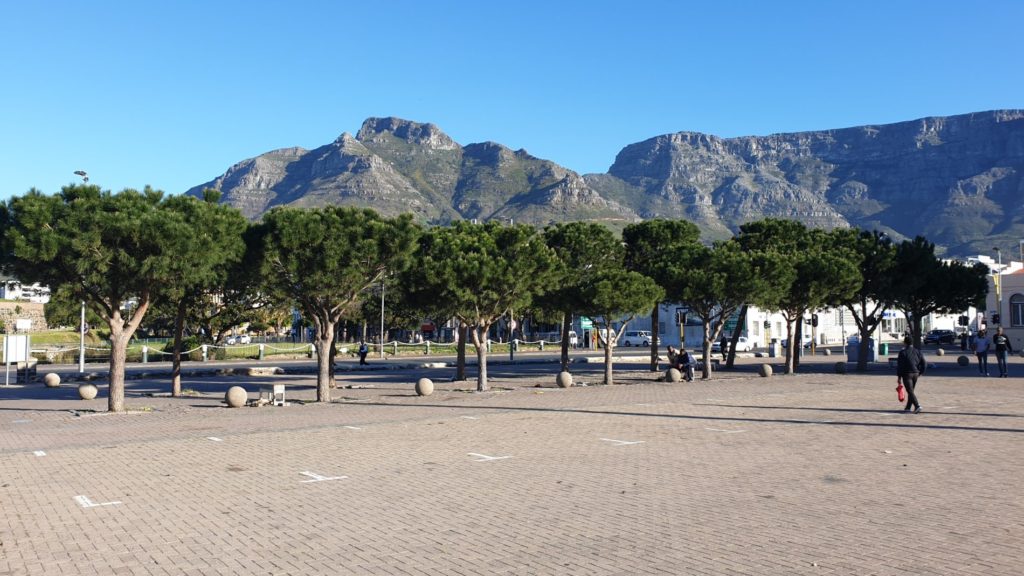 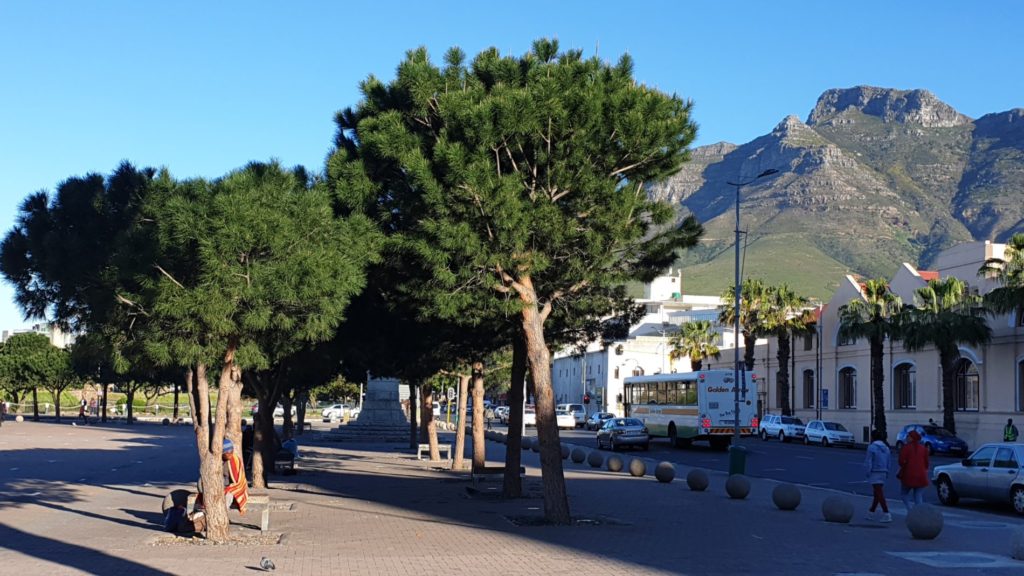 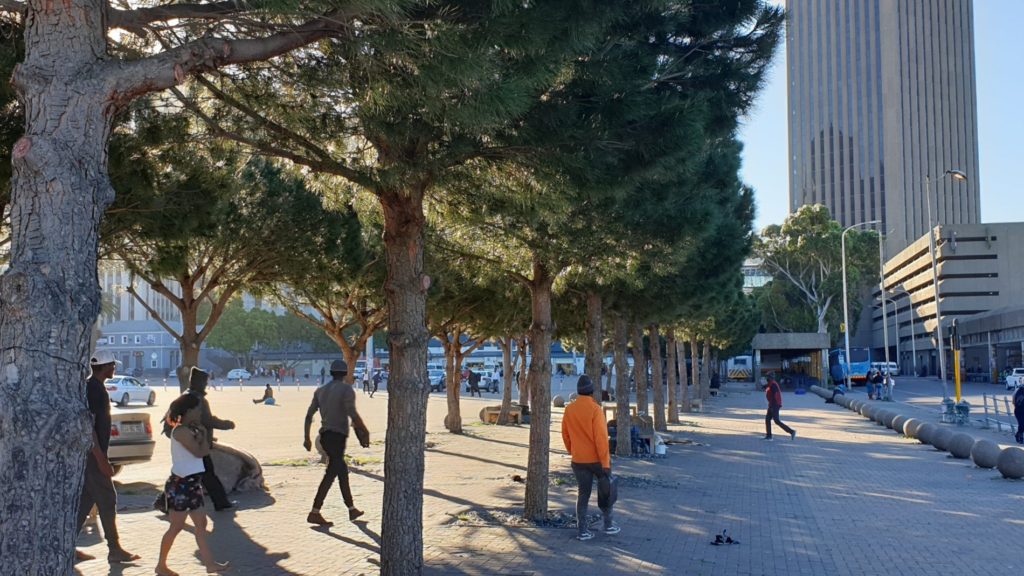 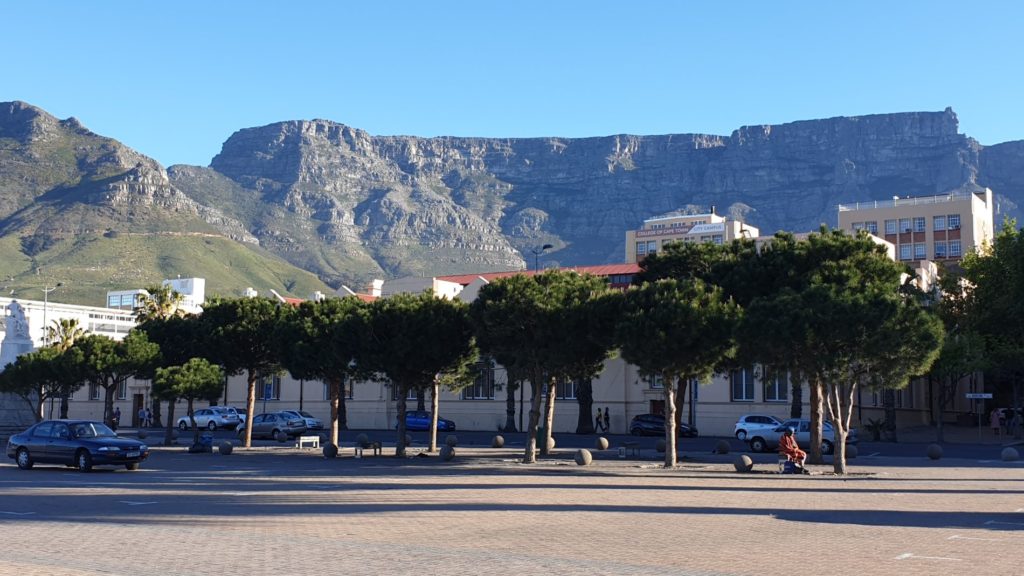